There are plenty of people online that have negative things to say about ghost producers. Some believe that there is a loss of artistic integrity when using others to produce your music.  We don’t believe this is true and here is why.

The Biggest Artists Use Them, So Why Shouldn’t You?

Almost all music released by leading artists is created by other producers.  These producers may not technically be ghost producers as they can be listed in track credits.  But that doesn’t change the fact that people are under the impression their favourite artist is making their music when that is not the case.  There are thousands of examples of where teams of people produce artists albums and singles for them.  Here is one example from Tiesto’s most recent Album “A Town Called Paradise”. 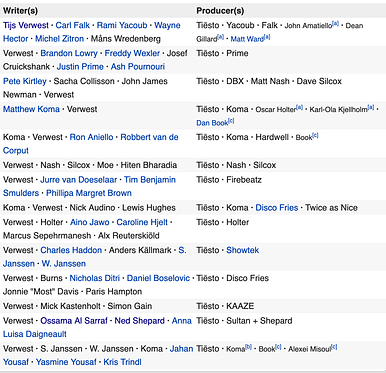 Here is the list of writers and producers from the album

Although it is moderately well known that multiple people work on albums, most fans would not be aware of how many people other than Tiesto create the music.  They go to his shows and support him as an artist under the impression that he is the one who creates the music.  They aren’t actively aware of the other people involved which is exactly the same situation as when a ghost producer is used.

This is the case with almost all of the leaders in the music industry.  You can read about some other examples in this blog post about what ghost producers are.

Successful artists are smart about how they work.  They connect their fans with great music and a great experience.  That doesn’t necessarily mean they need to create the music by hand themselves.  They choose the people to work with, coordinate the projects and have the final say on how the music sounds.  If you support an artist because they provide you with fantastic music, they are doing something right regardless of their studio production abilities.

Artists can sometimes be limited by their circumstances, creativity levels or may just find that they are able to manage music projects better than spending all the time in the studio themselves.  It’s important to let artists concentrate on what they are best at so that they can release amazing music.

This is something that a lot of artists struggle with.

The truth of the matter is that successful artists are a lot more than music.  They create a brand for themselves.  Popular artists find multiple different ways to connect with their fans whether it be through music, videos, interviews, streams, social media posting, performances and many other methods.  Major record labels and leading artists understand this and spread their resources accordingly so that they can be as successful as possible.

Some artists believe that if they can create the best music possible from their studio then they are entitled to the highest level of success as a musician.  This will never be the case as providing an experience to your fans is more than just the music.  It is the brand surrounding the music and the artists ability to resonate with the individual, regardless of the medium.

Use Everything You Can To Your Advantage

The music industry is competitive.  Having a career as a musician is something that an infinite amount of people are striving for.  In a competitive market it’s important that you play to your strengths and utilise your advantages.  Ghost producers can help you achieve success in the studio while you concentrate on all the other things I’ve mentioned in this post.

Other artists may try to put down individuals that use ghost producers.  This is usually because they aren’t having success in their own careers for whatever reason or because their brand revolves around artistic integrity.  It can also be because they are not able to or don’t think they should have to concentrate on all the other aspects involved in being a successful musician.

Overall, the access to professional ghost producers is an asset and something that should be used when needed.

Co-Founder of Producr.com an industry leading ghost production website. We have a team of talented ghost producers that can produce music in all genres and all styles.

2 thoughts on “Is It Bad To Use A Ghost Producer?”